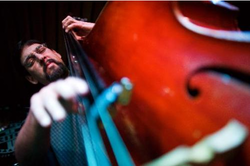 Mark's hard-grooving acoustic bass sound was birthed in the New York area, where he learned to play many musical styles. In 1980 he moved to Colorado with the band Arabesque and has since been a sought after sideman on over 100 albums, including Grammy award winner Tim O'Brien, Mollie O'Brien, Sally Taylor, (daughter of James and Carly), James Van Buren with Richie Cole, Keith Oxman, Mary Flower, and Mary Ann Moore. He has played for President Bill Clinton and other luminaries over the years.  Mark has toured Europe, regularly appears at festivals and clubs across the country and has performed with legendary performers such as Earl Klugh, Nnenna Freelon, Spike Robinson, Richie Cole, James Moody, Ernestine Anderson, Ben Sidran, Peter Rowan, Kenny Loggins, Henry Butler, Fred Wesley, Buddy Tate, Bruno Carr, Eddie Kirkland and Mark Hummel, and New York based jazz vocalists Allan Harris and Tom Lellis. Mark has opened shows for B.B. King, Kenny Rogers, Wilson Pickett, Koko Taylor, Buddy Guy and Junior Wells, to name a few. He is a reliable, personable, talented musician who has dedicated his life to bringing people top quality music in every setting imaginable.

For more about Mark, read his in-depth Q&A with Leigh Lim.
ACCOLADES

​Mark, along with band mates Jayme Stone, Adam Galblum, and Ross Martin are the proud recipients of the         prestigious 2008 JUNO AWARD
for BEST INSTRUMENTAL RECORDING OF THE YEAR for their work on the Jayme Stone release "THE UTMOST".  Other great musicians including Matt Flinner are featured on selected tracks.
Go to www.jaymestone.com for more details.

"Mark Diamond's subtle genius on bass cement[s] the band together."
- Alex Goossen, review of Mojo Alley by the Alleygators.

"The music was some of the finest yet most accessible improvisational jazz I had heard in years, with an interplay between musicians that was a joy to see and hear."
- Michael Vernier, The Front Page

"Bassist Mark Diamond's frenzied solo spanned the entire length of the fretboard, alternating between low drones and novel sounds from the instrument's higher registers. Diamond coaxed impossibly high-pitched notes from the thick strings, even as he rung occasional notes from the low E string as a back up."
- Jon Solomon, Westword
Join the mailing list for the latest news.